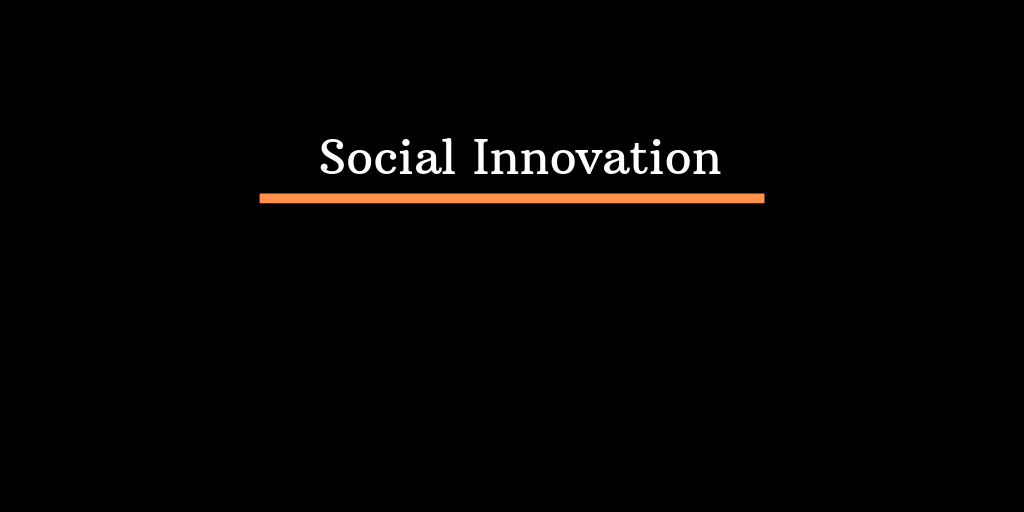 One of the subjects that have been approached this month across our social media channels is Social Innovation. Below we have expressed how social innovation is linked to our work and what are our thoughts on the topic.

Text
Integration is an exchange of general values and views on life, where differences are celebrated and not used as a reason to create barriers between people

What is social innovation?

At the core, social innovation means a process where effective solutions are developed and applied in order to challenge and change environmental and social issues in support of social development. According to Stanford Graduate School of Business, contemporary social innovation is driven by the wish of shifting the different social roles and relationships, the wish of exchanging values and ideas, and the desire to integrate the public capital with public and philanthropic support.

Why did we start this discussion?

Social innovation is about change, about making a shift in something that had long been passed from one generation to another without having the relevance or accuracy of these things, structures and concepts being reconsidered and re-evaluated.

As you might already know, our work is focused on helping the refugees integrate, this being done through our multiple services. Throughout our activity, we found various bold misconceptions and different understandings to what the term refugee in itself means, while also interacting with people that have different associations to what the refugee, as a person, is as part of the wider community. There have been strong references in the media that went as far as classifying refugees as "good" or "bad" depending on their origins.

The portrayal of refugees varies from one country to another, where a lot of the times the cultural background decides the storyline to what refugees mean when they come into a new culture. For this reason, we have witnessed a lot of negative and some positive responses to this particular subject.

These biases have brought social injustice and stigmas to the refugees as people. We are no longer talking about the term and its descriptive definitions, but we are talking about the lives of the people that have become refugees. The theoretical perspective that one may have is making disruptive changes in the attitudes towards refugees. As a consequence, something that started only as an opinion is taking the form of power that is deciding, affecting and changing the opportunities and lives of so many people.

Whilst one of us, the non-refugees (yes, we can also have a title), would be furious to have their life and future decided upon by others, it seems like a common practice for the non-refugees to become experts in what life standards a refugee must-have. That involves the quality of life we think they deserve, the professional roles they take, and how well they integrate.

Refugees are forcibly displaced people. You go to work because you have to sustain yourself financially. They had to move countries so they could sustain their existence.

We believe we can only change the future

#rethinkingrefugee is not only about our work at ACH. It is a collaborative effort of engaging and reshaping the concept and attitude towards refugees from an inter-social, intercultural inter-professional and overall humanitarian perspective. Our goals are not humanitarian, but we do ask others to approach refugees from a human-to-human position, hence, the use of the word.

A refugee’s state of integration is not a unilateral effort where they have to fit in and absorb another culture because that is the only way one can become integrated. To bring a sense of normality in their lives after fleeing countries, one should be introduced to a culture through example, reasoning and help.

One can’t expect other people to be acting according to their policies if these policies have not been introduced. It is applicable to cultures as well. In most cases, refugees are left disconnected and marginalized because this bridge of integration has never been built from both sides. By giving a sense of the new reality that refugees are now a part of, you are helping them integrate and connect to the universal path of progression.

It’s surprising how people do not invest in building the integration bridge, also they are the ones to marginalize the other group because they do not understand their position, and yet the expectations to be set to be met by refugees.

Integration also involves understanding a refugee’s frame of mind, how they evaluate and value things, and their cultural upbringing. If the above are not met, then naturally, it will be felt as if refugees are forcing their ways of living upon the other cultures. Integration is an exchange of general values and views on life, where differences are celebrated and not used as a reason to create barriers between people.


ACH is a social enterprise working to integrate refugees in the UK. Find out more or work with us.