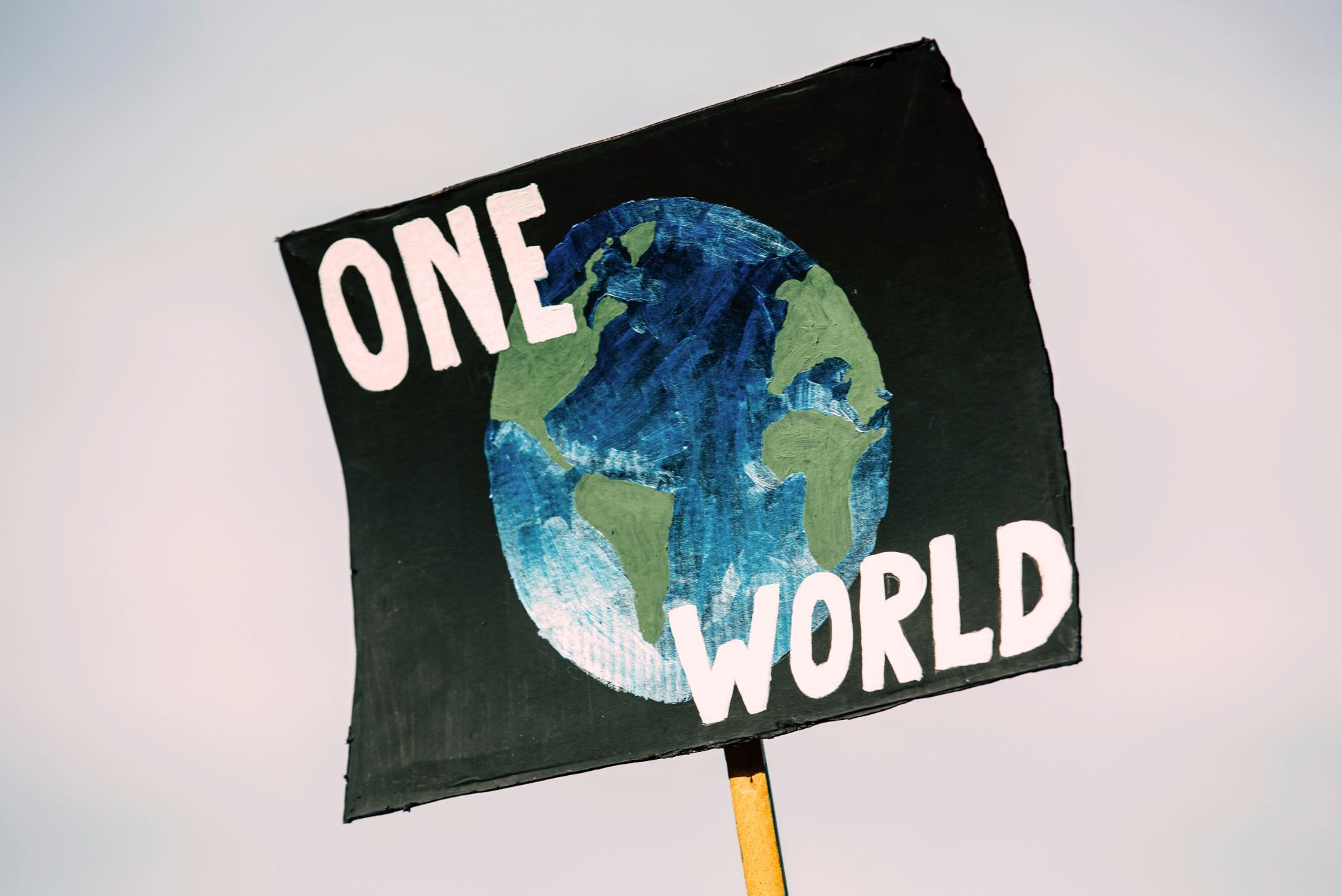 Today, Greta Thunberg, world-famous teenage climate activist, will be speaking in Bristol and leading a Youth Climate Strike in the city.

We want to join the conversation and take a moment to discuss why we should act now, in the name of stopping a future increase in forced migration and climate refugees because of a future climate emergency.

Read more below to find out more about climate change, climate refugees and what you can do to act for people and planet...

Text
'We deserve a safe future. And we demand a safe future. Is that really too much to ask?' - Greta Thunberg, Global Climate Strike, New York, 20 September 2019

For the first time it recognised climate change as an architect of forced migration. The ruling came after Ioane Teitiota, a man from the pacific island nation of Kiribati, took his asylum case to the UN courts. Teitiota argued that his life and human rights are in danger due to rising sea levels slowly rendering Kiribati uninhabitable due to loss of land, polluted freshwater sources and crop failure.

Teitiota eventually lost his case and the UN ruled his life was not imminently in danger, reasoning Kiribati and global governments still had time to mitigate the climate emergency.

Although Teitiota’s case was unsuccessful, the UN ruling allowed for the first time, that people fleeing the effects of climate change should not be returned to their country of origin if the threat to their human rights persisted.

This sets a precedent for the future. Climate change is now an internationally recognised reason to seek asylum. But what does the future look like? How likely is a climate refugee emergency? And what can we do to mitigate a crisis?

Human-induced climate change: what does the future hold?

Climate change is a crisis for every living thing on the planet. Human-induced climate change is a scientific fact, backed up by overwhelming evidence. There are no competing theories. Governments, companies and individuals need to adapt and mitigate so we can avoid disastrous consequences.

To avoid a climate emergency the IPCC has said globally we must keep warming below 2 degrees above pre-industrial levels, and adapt towards a now unavoidable 1.5 degree warming. Some scientists fear that these predictions are too conservative, and predict we could be on-course for a 3.5 degree warming if globally governments fail to respond to the crisis.

It is difficult to predict which one of these future scenarios will actually happen.

This is because climate change is an unavoidably political and economic problem. Modern industrial and post-industrial societies have build wealth upon the exploitation of natural environments, from oil, gas, deforestation and farming. Huge companies such as Shell, Saudi Aramco and Sinopec Group generate billions worth of US dollars in revenue each year and wield enormous global influence.

Governments risk losing income from these huge companies if they implement more stringent policies against fossil fuels and environment exploitation.

But will they lose out more financially in the long term? Investment companies are no longer able to ignore the financial risks posed by climate change. Last week, an economic report commissioned by US investment bank JP Morgan was leaked to campaign group Extinction Rebellion. The report implicitly condemned the bank’s investment strategy, which has strongly invested into companies aggressively expanding in fracking and Arctic Oil and Gas.

This could illustrate a sea-change that will see fossil fuel investment and revenue decrease as the financial risks of climate change threaten other investments and global stability in the longer term.

Hopefully, reports such as these will awaken governments to the longer-term risks of climate change. However, a turn towards populist governments in the US, Brazil and other superpower threaten this as leaders are less likely to look beyond their re-election, and are more likely to act on short-term economic pay-offs.

It is unclear how much the Earth’s climate will change, what is certain is that it will change. And with this certainty comes the need for global policies and plans surrounding climate refugees.

We’re all in it together: How likely is a climate refugee crisis?

From the period covering 2008 – 2017, weather-related hazards displaced an average of 21.7 million people each year, equivalent to 41 people every minute.

Although not the biggest carbon emitters, or the ones most benefitting from large-scale industry, less economically developed countries will be the most impacted and least able to cope with the worsening conditions.

But they will not be alone. More economically developed countries will also experience forced displacement. Already this year we have seen horrific bushfires in Australia, caused by record-high temperatures. The bushfires have caused displacement and have engulfed more than 10 million hectares of land, an area nearly as large as England (13 million hectares).

As Ioane Teitiota’s case at the UN demonstrates, global governments will have to adapt their asylum policies to include climate refugees as weather hazards, sea level and temperatures rise.

The Environmental Justice Foundation (EJF) defines a climate refugee as:

‘persons or groups of persons who, for reasons of sudden or progressive climate-related change in the environment that adversely affects their lives or living conditions, are obliged to leave their habitual homes either temporarily or permanently, and who move either within their country or abroad.’

Climate change will effect different places indiscriminately, but some governments will be more able to mitigate the consequences and provide assistance to displaced people.

Ultimately climate change will effect all living things, it will change the whole planet. And we must all work together to combat greenhouse emissions, reduce waste and search for technological solutions.

What can we do?

The only way we will be able to limit climate change to 1.5 degrees above pre-industrial levels is through international bodies, governments and companies working together to cut greenhouse emissions, create international climate laws and introduce carbon taxes.

This doesn’t mean that individuals can’t make a collective difference. Governments and big companies need to be held accountable by individuals through campaigning and changing consumption habits.

1. Campaign. Use your voice to stand up to those in power.

Tell your local MP, councillor or city mayor that you care about climate action and want them to change. Their actions and lobbying will influence local and national policies and actions. You can find out who your local MP is here.

Join a social movement or campaign. Get people talking about climate change through groups such as Extinction Rebellion, Greenpeace or Youth Strike 4 Climate.

Avoiding meat and diary is the most effective way you can reduce your impact on climate change. This doesn’t mean you have to give them up completely, but reducing your consumption will make a huge difference.

Try to choose locally sourced, seasonal produce and plant-based meals. Changing your diet will also benefit your health, so it can be a win-win situation. To see the carbon costs of different foods, the BBC has a useful

3. Cut back on car and air travel for work.

If you have to travel abroad for work, instead suggest a video-conference to reduce the carbon impact of air travel. Rather than driving to work, look into cycle-to-work-schemes, or try a carpool scheme with colleagues.

Transport is the largest contributor to UK emissions, at 28% of greenhouse gases emissions. Walking or cycling to work, if you are able, can also improve your health and activity levels.

4. Reduce your plastic consumption and waste.

Unfortunately products wrapped in more sustainable packaging can be more expensive, and this is a problem that needs to be addressed through government policies and laws that introduce taxes to plastic packaging so the suppliers shoulder the environmental costs.

If you can’t afford to make these consumption changes, you can write to your MP, to supermarkets and companies to use your voice for change.

Consuming less and buying less can make a big difference.

Avoid single use items and fast fashion. Try to buy higher quality products made with sustainable materials that will last longer, costing more in the short term, but saving you money in the long term.

6. Reduce your energy consumption or switch to a green energy supplier.

There are lots of things you can do around the house to save energy, and money! Switch off lights, turn your TV off (not just standby), take showers rather than baths and wash your clothes at 30 degrees.

Act in solidarity: why should you make a change?

The climate crisis will affect the whole Earth. We need to think of ourselves as Earth-citizens, working together to adapt and mitigate the affects of climate change. Floods, droughts and extreme weather will not recognise national borders, and so we too need to look beyond borders.

Like Kiribati, Britain is an island, and vulnerable to sea-level rise. It is highly likely we will see displaced people within our own country in the future due to flooding and a changing coastline.

Climate change could become a catalyst for the biggest refugee crisis yet, one that could effect your children, grandchildren or great grandchildren. Our actions now will impact generations to come.